This festival, Beltane, or as we Irish Witches spell it, Bealteine, is the Fire-Festival that recognizes not only the change of the seasons, from Spring to Summer, but is a celebration of protection, fertility, and the bringing forth of change. As such, it is a good time to discuss the ideas of the topic of this Blog Hop, which is how do you make something positive and useful about a draw that deals with "difficult" cards? I have some ideas about that, and I will focus this discussion on perhaps the most difficult cards in the deck, Death and the Devil. These cards frighten people, make them feel as if there is something wrong in their lives, and can even make them decide that there is nothing they can do about what Fate is telling them WILL happen. So--how to deal with those ideas, and make these cards serve their intended philosophical purpose? 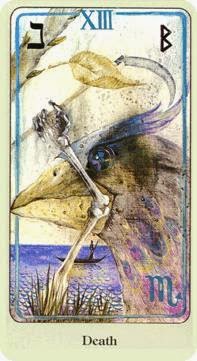 DEATH is a card that can terrify people, because most of us have a tendency to take its meaning far too literally. Seeing a client across the table turning white with shock and whispering, wide-eyed, "Who is going to die?" is an experience that can truly derail a reading. So--what to do? I invite the client to look closely with me at the card, and remind the person that there are many symbols on the card, that each has its own meaning, and that there is more than one kind of "death", some of which are actually kinds of "birth" First we look at the Hebrew letter "Nun", translated as "fish", and we discuss the arcane belief that the fish represents the concept of the yet-unborn soul swimming in the womb, and I remind the client that the sigil in the upper right corner is the rune Beorc, which represents the birch goddess and is, in the Celtic Tree Calendar, the first tree, representing "Birth." And so, how to interpret Death more widely?

We look at the image of the boat on the card, not just the ferry over the Styx, steered by Charon, but the bark of birth, bringing new life; this is a place where I remind the client that a baby's cradle originally was thought to symbolize that "birth-boat". The trees and grass signify plants, the bones minerals, the birds, the animal world, and the ferryman, the human world, all the elements which make up life on earth, and each of which is in a constant state of flux and change, death and rebirth. The peacock's eye in the center signifies looking at the truth in regard to looking at Death, and has also been used as a symbol of immortality, since the soul does not die but "looks through" to the next phase of being. In most arcane mythologies, this peacock has been used to signify the soul and the divine potential of a person.

Therefore, we can look at the Death card, and think about what needs to change, as the dying leaf on the card doesn't mean there will be no more trees, but that the tree loses its leaves in the winter to make possible the tender green of spring's rebirth. The eye of the peacock stares silently and serenely into the coming future. So, dear reader, what do you need to let go of, what needs to die, what needs to be taken out of your life so that your new cycle of living can begin? That is the Death we look for, the "little death" that, philosophically, is seen as the beginning of life. 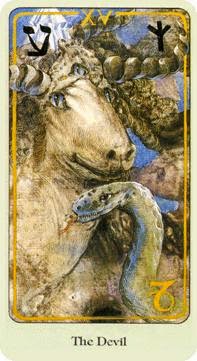 THE DEVIL is a Being whom we are acculturated to fear. And even in people who do not believe in traditional religions, the devil is seen as evil and fearful; therefore, when it is drawn in a reading, your client is going to worry about who in the situation is the evil person, is evil coming into their life, or, worst of all, are THEY evil? Maybe some history and some philosophy might help to defuse the fear generated by this card.

In religious writings, the Devil is given the name "Satan". In the Judaic culture from which this word is taken, it is written "Ha-Satan", meaning "The Satan". From Jewish theology, we have the following explanation: "The word "satan" means "challenger", "difficulty", or "distraction" (note that it is not a proper name). With the leading ha- to make haSatan, it refers to /the/ challenger. This describes Satan as the angel who is the embodiment of man's challenges. HaSatan works for God. His job is to make choosing good over evil enough of a challenge so that it can be a meaningful choice. In other words, haSatan is an angel whose mission it is to add difficulty, challenges, and growth experiences to life. Contrast this to Christianity, which sees Satan as God's opponent. In Jewish thought, the idea that there exists anything capable of setting itself up as God's opponent would be considered overly polytheistic—you are setting up the devil to be a god or demigod." This is entirely congruent with the view of Traditional Witchcraft about "Guardians", which are obstacles thrown in our path by the Universe, asking us, "How badly do you want this? Are you willing and able to go around, under, over, or through the challenges to get to the goal?" And this is my view of the Devil in the Tarot--a card denoting distractions, obstacles, interference and challenges on the Path of the querent, and a warning that these must be overcome in order to move forward.

This is my way of dealing with the "difficult" cards. Even a "problem child" is still a child who must be given scope to become, to grow, to do what good they can. And in these contexts, both Death and the Devil could be less of a frightful omen and more of a directional marker for the querent. And on the feast of Bealteine, we are looking for the tools of change, aren't we?

Posted by Aisling the Bard at 3:00 PM