This Hop celebrates the contest between the Oak King, Cernunnos, the Green Man, who is God of the Waxing Year and fertilizes the land with plants and babies in women's wombs, etc., and his “Tanist”, or chosen replacement, Lugh, the Holly King, or Red God, who brings the Harvest and creates the Waning Year by means of blood sacrifice of animals so there will be meat, reaping the grain and vegetables and plants, and otherwise clearing the fertile ground and taking the results of the Green Man's cycle of fertility, making it the Red God's cycle of harvesting. It is important in the understanding of this Lore to realize that the two Deities here represented are actually seen as one God, two Faces of the same Being, two aspects of life, and actually perform the combat between Oak and Holly as a necessary adaptation of their own Being, with the full understanding of the necessity of both a waxing and a waning year, planting and harvesting, and the joy of creation connected with the necessity of using that creation. And so, my friends, as the Oak King and the Holly King are two aspects of the same being, so we will use our Tarot cards to explore and explain the duality of our own natures. Who, indeed, is your “other Self”, your “Tanist”? How is it that you are, actually, of “two minds”? And how does that affect your life?

Of My Waxing Mind--- My usual Significator in the deck I use most often, the Haindl Tarot, is the Daughter of Cups, my primary Goddess, Brighid of the Three Fires: 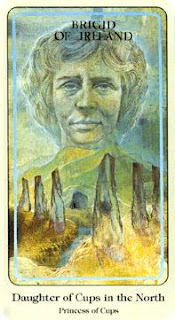 She represents the three aspects of living that I invoke most often in my day-to-day working of my own life, and my assistance through readings to others--these aspects are Poesy, Smithcraft, and Healing, also known as Fire in the Head, Fire in the Hands, Fire in the Heart. The Triple Fires of Brigid resonate with me in my own activities and in my knowledge of the triplicity of all actions in life--first you know and learn, then you care and focus, and then you decide what to do. And so this card represents to me all the aspects of "planting the seeds" of each and every action I intend, and letting me know what, and why, and then how.
*******
Of My Waning Mind-- My "Other Half", my Tanist, the half of my Being that is not part of the focus and planning and preparation for seeding the land, is represented here by the Mother of Swords, Nut/Nuit, the Egyptian Goddess of the Shadowed Night. 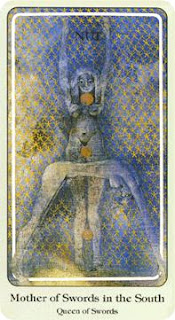 Nuit's energy is that of the night sky, the shadows that cloak all the light of day in darkness. She is that which represents the pause for reflection, the ceasing activity to contemplate the next step, the peace of sleep and the rest and reawakening that comes with Death. And yet--it is the darkness of Nuit that makes it possible for us to see the stars, gleaming one at a time through the endless cloak of darkness, each of them with its own light, name, and meaning---and that, my friends, is the energy of my Other Half, my Tanist. I never succeed at creating that which I wish to invoke without having to take into account all the other details that only present themselves when I believe my work is finished and I can now rest. Drawing away from the activity of Brighid's Flame makes it possible for me to contemplate my actions in the soft darkness of Nuit's silence and shadows....and in so doing, I always find something that I did not know was going to be there, something that is an intrinsic part of what has been created but that could never be noticed or recognized or put into play until I believed my works were done and I might rest. Nuit is the bringer of the darkness without which we would never be able to notice or manifest what is truly in the light. And she is always the other half of all I believe Brighid has guided me to do.
******

And so, to the directions and elements that influence, and are influenced by, my Waxing and Waning Being. Mind, Will, Action, Intuition, and Spirit manifest for me with the following cards this time around: 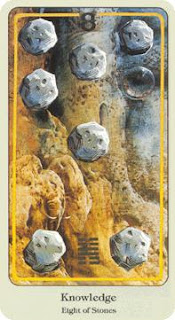 The Eight of Stones, Knowledge, connected to Brighid's Fire in the Head as I study and immerse myself in new ideas, and to Nuit's silent shadows as I always realize that anything I learn usually leaves me with more questions than answers, so this one is never finished, just constantly mutating and going in a different direction. 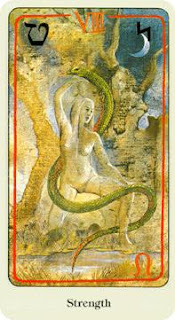 The image on the card fits perfectly with my understanding of the two facets of my Will--it's not just "what do I Will" as Brighid's Fire in the Heart represents, but it is also, "But what do I Need To Do", which is not at all the same thing, as Nuit shows in the shadows that what I want might not be the right way to proceed. We have the Strength of Eve in the Garden, knowing she must defeat the Serpent, but unwilling to harm him or become evil as he was supposed to be. So for this one--there are always more than two answers. 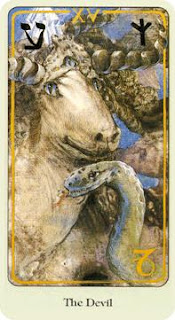 No surprises here, because the "Devil", whose name in Hebrew was "Ha-Shatan", is literally "The Obstacle" and represents all the many boulders, corners, dead ends and detours in the road we try to map for ourselves. Brighid's Flame has given me "Fire In The Hands", as in, "You need to and want to do THIS", but Nuit's starlight and darkening shadows will always remind me that nothing is that simple and nothing goes the way you want it to the first time....So--I expect the obstacles, and if I can, I make them part of the journey. But I keep going.... 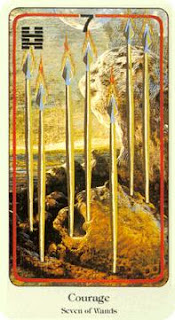 Not at all strange to me that the card I drew for Water is a Fire card--because, for me, Courage is as much intuitive knowledge as it is the bravery to act in a certain way. I completely identify Fire with Water and vice-versa, because as far as my own life goes, what I wish and desire is always moderated by my inner voice whispering of emotion and intuition. Here my two Goddesses work in harmony, as Brighid inspires me with passion and intent, and Nuit shows me the hidden mysteries of what I expect to accomplish and how much more convoluted is my Will than I am consciously aware.

And here we have a final result of all my seeding, sowing, thinking, harvesting, and doing--simply put, the concept of constant and repeated change, the knowledge that nothing remains the same and nothing is as simple as it looks, and the awareness that I will never reach the end of the journey, just a different phase thereof. And for me, knowing the journey is the destination IS Wisdom. And I do keep learning that, from all the aspects of my Two Beings.

Many Litha blessings to you all, and may your own journey, planting and harvest, be productive and rewarding. Blessed Be!

Here is the list of all participants in the 2017 Litha Blog Hop, with links to their blog entries. Neighbors of each participant can here find the permalinks to post on your own blog entry. Please enjoy your journey through the Hop: