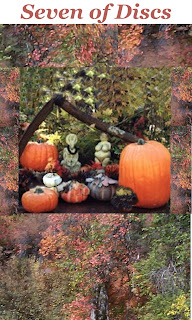 A bountiful harvest, indeed, all seven pumpkins glowing in their potential richness...This is a photo taken by Taliesin at Affleck Park and a card created by himself for this deck. So--here's what he had to say about it:

This is a picture of the Mabonfest altar. I added a few pumpkins and messed the photo around a bit with pen and ink. For me it is such an example of the Harvest and the stability of having food and family. Seven is one of those numbers that means that things are not anything like you expected them to be, but it might end up better than you thought, just different. I think the harvest is like that because any time you plant a garden, it's a crapshoot. You get what you get. But you need to be thankful for that, even if it isn't exactly what you expected.

Upright: You have paused in your work to regard the situation. It isn't necessarily the way you envisioned it but it might turn out better than you thought. Keep going.

****
This card reminds me of unexpected harvests. Seven is the next card after six, which represents the second level of a triad--something built on the foundation of body, mind, spirit. So I like the concept of the unexpected here, as Taliesin says--kind of like finding an extra coin in your pocket when you thought you had them all. So--what's the good news!


Posted by Aisling the Bard at 3:30 AM No comments: