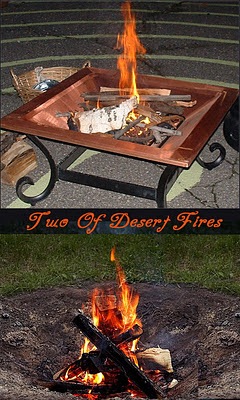 Here is the description of this card as submitted by the artist, followed by today's interpretation:

Card Meaning: I like the symmetry of this. I have been around the community a very long time, and these two fires were both lit in honor of the Goddess Utah at community Sabbat rituals, one at a CUUPS Samhain and one at a Quickbeam Beltaine at Just Past Bluffdale. Two fires, two festivals, exactly across the wheel from one another, both representing the power of the Goddess Utah as She has influenced our community for almost 25 years of public paganism. The 2 of fires is about balancing your passion, as the festivals of Beltaine and Samhain balance one another across the wheel. And there is not any reversal, because the reversed meaning is in the card itself.(card and description by Patric).

The Suits for the Utah Maninni Three deck were the Elements of the Goddess Utah, who was our theme idea, so the Two of Desert Fires is the equivalent of the Two of Swords. There is in the card the same idea of balance and opposition...and the context of "a choice must be made, and neither side bespeaks itself more strongly than the other." Bealteine fire and Samhain fire--across the Wheel from one another, and seeming similar, yet could not be more different in attribution. Will and Emotion do not always make good bedfellows...a clear head might be needed here, not the "head filled with smoke" that is spoken of in the Rune Poem of Amairgen. Do your fires burn for fertility and growth, or is this flame the consummation of the issue? Take a really good look at the situation in the cold hard light of day, and let yourself be led by the illumination which will guide you where you really want to go.

Posted by Aisling the Bard at 9:00 AM No comments: