Yesterday, I was offline--doing a personal "blackout" in conjunction with the Internet blackout protesting SOPA and PIPA. So, today, we'll talk about yesterday's card, and then today's card. 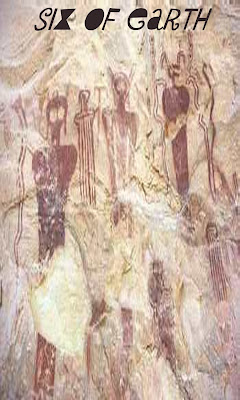 Here's the description and interpretation of this card by the creator, Astara Blackthorne:


Card Formation: This is a petroglyph in Sego Canyon, of six human figures. It has gotten much discussion over the years, because the eyes on some of the figures look the way people say aliens might look. As such, to me it becomes a symbol of both the past and the future, which fits the meaning of this card. I also think the cave art of Utah and the history of primitive peoples here are a wonderful manifestation of the Goddess Utah. One of the things that is unique about this representation of the six of earth is that this is very very ancient art. So, we might think of it as that which endures through time, and the meaning of the six of earth is about what is built on the foundation.

Card Interpretation: This card is about the second level of achievement of a goal....three on three. It is significant, if you get it in a reading, of some way in which you need to alter what you are doing to take the next step in your process. It is as if the Universe were saying, "ok, so now that's done...now what?" You must always think, when drawing this card, of how many different ways there might be to continue on the foundation you have erected, and you must choose the one that has structural integrity, and will enable what you are building to endure through time. 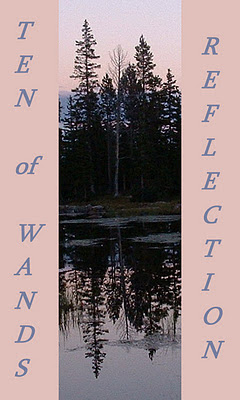 Here is a card from the second of our three Utah Mannini Tarot decks. Interpretation and card discussion by the card's creator, Marina Wells:

Ten of Wands by Marina

The Ten of Wands is about carrying thoughts with you, and getting to a place where you can set them down, and deeply consider them, in peace and quiet, so that they do not burden you but can be brought to becoming useful ideas. This card is created from a photo I took the weekend after my grandmother died, when I went up to Mirror Lake, which is a special place for me where our family used to camp. I just sat and thought about Granny, and then the sun started to set and I took some pictures.

I cut this one so that there were only five trees showing, because I wanted to convey that thoughts are things. The reflection of what you think about into your life is as real as any material thing could ever be. We make our lives with our thoughts. And of course even if it is upside down it is still the same picture. You might want to think about that.

So, yesterday we get structural integrity, and the idea that what we build endures through time, and today, we remember that thoughts are things. So--what are you thinking about today, and how is that thought, enduring through time, going to affect your future? Hmmmm......
Posted by Aisling the Bard at 11:41 AM No comments: