Here is the list of all participants in the 2016 Lammas/Lughnassadh Blog Hop, with links to their blog entries. Neighbors of each participant can here find the permalinks to post on your own blog entry. Please enjoy your journey through the Hop: 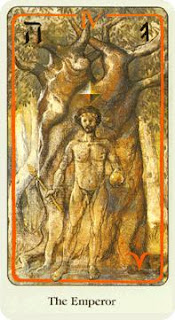 I look at the image on the Emperor card in the Haindl Tarot, and immediately I see opposing energies being displayed, specifically, the contrast between the traditional view of the Emperor and the images Haindl has chosen to use. One sees a naked man standing in front of a rugged-looking tree, holding a ball and a stick or wand, and with a look on his face that seems to say "where do I go now and what do I do?" This is as far as one can get from the traditional image and intent of the Emperor as depicted in more traditional decks, such as Ryder-Waite, those cards showing a king seated in his power and prosperity on his throne, gazing with a look of authority at all who see his robes, his demeanor and the top-of-the-mountain placement of his position. Haindl's Emperor, on the other hand, seems to be looking to Nature and also within his stark-naked and vulnerable Self for guidance as to his next step.

And yet, if one looks deeply into the details of the card, one will see that the intent of Haindl's version of the Emperor is to depict the exact energies we seek out in this Hop, the energy of ability, strength, power and purpose combined with the energy of vulnerability, connection, uncertainty and indecision. In order to interpret this dichotomy, one must look deeply at all the details of the card, so let's do that.

The first thing one notices is the presence of the tree with its overwhelming height and intricately interwoven branches. The tree is the sacred tree Yggdrasil, the world tree of Scandinavian myth, with its roots deep in the mysterious origins of life and its branches reaching up to the stars and beyond. One must know a bit about Scandinavian mythos to be aware that the tree is usually considered to be an Ash tree, which in all the mythos of tree lore from many cultures holds the meaning of "take your Power", and it is easy to see the possibility of Haindl intending that the Emperor seem to be actually emerging from beneath the Tree, having within his grasp both the sceptre of his kingly position and the golden ball denoting the riches of his world. Even in his vulnerability, expressed by his nakedness in the shadow of the World Tree, it does appear that he holds Power and can be seen to be embarking on a journey of complete rulership over his world.

However, if one looks carefully, it is clear that the rod in his hand is the same in its denotation as the one held by, and therefore probably was the one he received from, the Empress. This seems to suggest that his supposed almighty power is drawn both from the energies of the World Tree, i.e. the empowerment of all his foundations, as well as from his connection with the Great Mother, who is also probably, in this deck, the female in his life, his Empress. The gold ball he holds in his other hand symbolizes the material world, the riches of his position...but he is not in his golden, luxurious court and he is not surveying a pile of gold as would a ruling king. No, in this case, the gold is simply potential, and the ball is perhaps something he will journey to achieve, but the riches it may signify are certainly not present in his natural state. This depiction of the Emperor shows him as simply another human being, walking in his true form and natural colors through the domain of the Gods, bringing to bear his own vulnerability as he journeys forth to create his Will (the rod) and seek his destiny (the ball), but in his current state his power and position are potential, not yet realized, and it will be his journey that creates his lordliness. Haindl has successfully depicted the Emperor as the exact opposite of his traditional meaning, not "power over" but "power within", not lordliness over the riches of the world but a simple connection with the riches of existence, and the inner Being denoted by his nakedness expressing his human vulnerability which is a determining factor in his power and position. A union of opposites, indeed!