Tarot Blog Hop, Lammas 2015: Shining and Mercurial...Aren't We All?

Our Wrangler for this Hop, the creative Joanne Sprott, invited us to discuss the influence of Astrology on the interpretations of Tarot. I am vastly intrigued by this topic, because I teach a class combining one's Astrology sign with the Fool's Journey, so I have a rather complex interaction with both planetary alignments and tarot trumps. So--Sun, Mercury, Me (and You, too...) Hmmm....let's chat about it. How do we Be this?

The Sun in my usual interpretation of the Tarot has to do with active energy, male energy, the God, the "power hand", and other concepts that are related to "shining forth". We look at the Sun as the harbinger of life, that without which the crops cannot grow, that shining light which cannot and does not conceal itself. We know in our hearts who we Are, and our Sun Sign in the Astrological world is supposed to be a template for that awareness. Our Being is not chained to the esoteric meaning of our Sun Sign in our Birth Chart, but we do see some similarities between the explanation of our Sun's qualities and some of our own inner impulses on how we choose to express our Selves. In my deck of choice, the Haindl Tarot, the Sun shines over a complex horizon, focusing on the single rose in the foreground, and it seems obvious that the flower's petals are basking in the light, but no two of them are similar in their angle of orientation, representing the many facets of the illuminated personality. 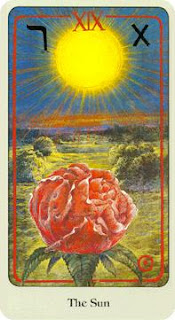 Mercury, on the other hand, only shines when he wants to. The Trickster, the Fool, he who mutates at Will, he who makes it impossible to predict that which he will do, this is the alignment of Mercury both in ancient mythos and in Astrology. We see the placement of Mercury in our charts as the awareness of our Being, and how we communicate that to others, both in words and in actions. But we also recognize that the shining light of the Sun will sometimes choose to hide in the shadow of mercurial thought and action, and that we can understand our own Being from being able to mutate and codify our way of interaction with events, life changes, and other beings. Therefore, in my opinion, there is usually no single card in the Tarot deck which always aligns with Mercury...this alignment is dependent upon circumstance. I often remind people that the Fool in the Tarot is not called the Fool because s/he is stupid, but to represent the openness of the zero, the unfilled circle, which can be filled at Will, and because the Fool also calls to mind the medieval custom of the one person in the King's Court who could speak truth to royalty with no fear of retribution, as well as representing the concept of acting and speaking without thought for consequences (being "Foolish") which, in the modern world, does sometimes not work out so well. So, in the Haindl deck, there is a Trickster whose actions have come home to roost, who holds the bleeding swan, gazing into the distance with a look of loss upon his face...and yet, in the background, there seems to be a chance of rebirth, of another choice, of more possibilities to fill that zero. The astrological sign on this card is actually Uranus, representing the distance of possibility and the far-reaching consequences of one's actions. So, sometimes, there is a Mercurial flavor to the Fool...but not always. I don't see this card as the Tarot representation of Mercury, but as leading us to that representation. There's more. 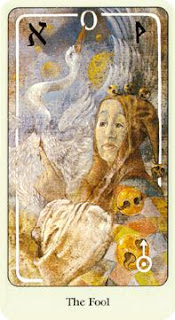 And sure enough, the very next card after the Zero of the Fool is the One of the Mage, he whose raised finger and focused wand says "I Am", he who chooses what he shall do, and he who may change reality in accordance with his Will. The Sun is Being, the rising sign is Expression, the Fool is possibility, and Mercury is Communication--and all three of these entities combine in the energy and power of the Mage, who, in the Fool's Journey, represents self-awareness and claiming of one's personal Power. He gazes serenely into the future, holding his tools of possibility, grounded in his intention, and fully self-aware that his number, one, is the beginning of Being, his own Being. So it does not surprise me that the astrological sign on the Mage in Haindl's deck is, indeed, Mercury. 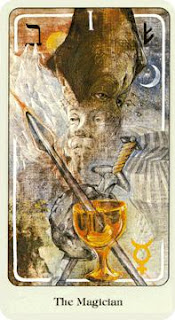 Combine one's essential personality, the Sun, with one's choice of self-expression, Mercury, and one's creation of one's personal reality, the Rising Sign, and one is looking at the Mage, whose keyword is "I Am, I Said" and who will Be, Do, and Become, what he Will. Male or Female, old or young, right-brain or left-brain, makes no difference to the essential need of all humans to Be, to Become, and to choose their own way of Being. And Mercury and the Sun together. both in astrology and the tarot, produce the energy of the self-aware. focused, and personally empowered Being, who is as s/he chooses to be. And that, my friends, includes every one of us, doesn't it?