You've gotten here, I hope, through the Tarot Blog Hop, from the writings of Alison Cross  Welcome to the home of the TarotWitch, the next stop on your journey. Have a seat, have a cuppa, bask in the warmth of my HearthFire, and let's talk....
************************
This is round three of the world-famous "Tarot Blog Hop", an interactive set of essays and spreads by many Taroteers all around the world. This Sabbat's topic, linked with the Festival of Bealteine, takes its focus from the primary symbol of that Festival, the Bealteine Fire. And the topic tells us that The Fire Tends To All. So---what do we mean by that?


I decided to think about this blog draw in a rather less literal way--I usually create spreads in harmony with a concept that is generated by the question posed. But this time--no. This time I decided to simply work in harmony with the element itself--Fire. I had various reasons for this....

For one thing, we do not usually think of fires as "tending"....indeed, most of us think of fires as something that need to be tended. I have heard, often, from my father who was a "woodsman before being a woodsman was cool", the catch-phrase, "Fire is a good servant but a bad master." It wasn't until I fully grew into myself as a Witch that I began to question this idea. I had read much by then about the elements, and in so doing had come across the Celtic idea of fire as not being part of the Triad of Land, Sea, and Sky, because it was instead a living Being. If Fire were considered to be a living Being, should one see it as a "servant" at all? Or, perhaps, should one see fire, in every context, as a companion, as someone working WITH one on the Journey?

I have adopted this view in my journey with Fire, and it occurred to me in the idea of this Hop that if Fire is, indeed, a living Being, then it is sentient. And if it is sentient, then it can, indeed, "tend to all". And if Fire is a living Being, a life force, the "spark" of Life that is celebrated on many levels at Bealteine, then how better to discover in what way "fire tends to all" than simply to ASK?

My draw, therefore, based its format on the concept of getting information from Fire itself. I simply called Fire by its name--and it occurred to me that I could use that to generate cards. In the presence of the Living Flame, I drew one card for the alphabetic position of each letter in the word "fire", and related these positions to the position of cards in the Major Arcana of the deck I was using, Tarot of the Old Path. So--F.I.R.E. gives us the numbers six, nine, eighteen, and five. And therefore, in order, the name of Fire corresponds to these four cards: The Lovers, The Wise One (Hermit), Illusion (The Moon), and The High Priest (Hierophant). And so, then, from Fire's own Being, from the very Name of Fire, how does "the Fire tend to all"? 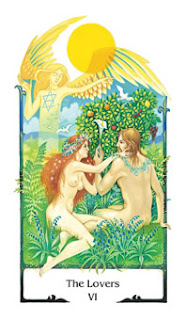 F: The Lovers: First, Fire draws us together. as knows anyone who has ever been on a camping trip. The glow is compelling, and the warmth is essential to our comfort, our balance, our ability to participate fully in the moment. Look at the Lovers, the primal union of opposites, and think of the way it is to sit with others around a campfire. We forget our differences, we see the glow in one another's eyes, we huddle closer for warmth, and we get to know one another without boundaries or barriers. The Lovers represents connection, and the Fire tends to that connection wherever it lives. The only Fire represented on this card is the Fire of the Sun, but the Fire of passion is clearly represented in the way they look at one another. So here Fire represents that warmth and light that connects us to the Other, even, and especially, the Other who is not-like-me. And this, in our community and in our society, this communion with the Other, is a kind of "tending" we ALL need. 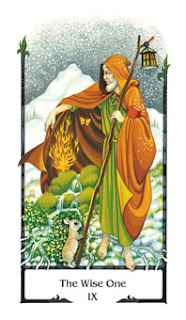 I. The Wise One (Hermit): Interesting...first we are reminded that the "Fire tends to all" in assisting us in connection with the Other, and then we are told that the Fire reminds us to take ourSelves apart and ruminate in solitude. Hmmm....

Well, not so odd, really. Notice that our Wise One bears his OWN fire, right there under his cloak. Anyone who knows me will know how this idea resonates with me, and how I have repeatedly been known to tout the concept of needing to tend one's own Fire before one attempts to share oneSelf with anyone else. Perhaps the Fire is reminding us that this solitude and contemplation is the road to Wisdom, and that without permitting ourselves to be Tended by our own Guides, without caring for our own Inner Fire, we will have nothing to share. And Fire tends to us, to permit us to glow from within. And it is thus that we become---well, Wise Ones. I love it that the letter representing this card is "I"! Could Fire have made its message any more clear? 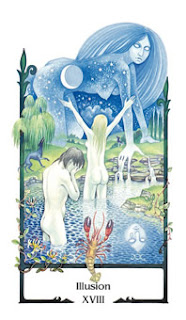 R. Illusion (The Moon) In typical esoteric fashion, the Universe, with Hir famous sense of humor, has given us, in the draw generated by the very Name of Fire, a card that is wholly (holy?) Water. And so, in this watery realm, how is the Fire tending to us? Well, if you look at the name of this card in this deck, and really look at the picture, you'll get an idea. This card in this deck cautions against, in the words of Lawrence Ferlinghetti, "mistaking any thing for what it may not be". The card reminds us that the light of the Moon is an Illusion--it's a dark, cold rock hurtling through space, lit only by its reflection from and interaction with the Sun. So, then, Fire reminds us, it is warmth and light that will "illuminate" the situation for us--Fire tends to our awareness by casting Light on situations and issues so that we will not be drawn into false impressions and actions because we have mistaken illusion for reality. Fire sheds Light. And that is another way it Tends to All. 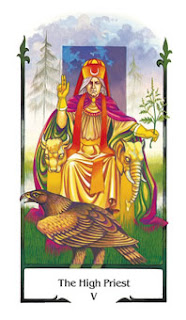 E. High Priest (Hierophant): Here sits the final avatar of the Fire's journey with us, the place where our study, companionship with others, self-care and avoidance of illusion may finally take us. The High Priest is the representation of one who has attained self-knowledge, arcane wisdom, and the ability to share with and teach others. The Fire has brought us to the threshold of wisdom and understanding, and reassures us that if we continue to act in accord with Light, Warmth, and Illumination, we too may achieve this place of awareness, and we too may be able to pass down the illumination the Fire has accorded to us.

And now, why don't you continue your journey by Hopping over to the Blog of Donna L. Faber, here...Happy Hopping! And Blessed Bealteine!

And if you need to find your way back to the 'Hop, here's the Master List...
Posted by Aisling the Bard at 10:00 AM