How Can I Be The Best Candle?


This post is part of the wonderful TarotBlogHop created by Stephanie Arwen Lynch, and thus the bunnies. If you've hopped here from somewhere else, just follow the links to dance the bunny-hop through the whole line.

(Click on the bunny to see who hopped to me...)

February 1st is the Festival of Imbolc, the feast of the Goddess Brighid, and the first day of Spring in Ireland and many other Celtic countries. We are coming out of the darkness of winter, and of all Her symbols, the most characteristic icon of the energy of Brigid is the Flame.  She is the Goddess of the Hearth, and Her three faces may each be represented by a different kind of fire: the forge-fire of "smithcraft", the making of all kinds of things; the poet's "fire in the head" of creative inspiration; and the healing fires of love, compassion, justice, and the warmth and light of physical good health. So, of course, we who honor Her are sparks of Her Flame, trying to spread Her light in the world as was suggested by Portia in The Merchant of Venice: "How far that little candle throws its beams; So shines a good deed in a naughty world!" (The Merchant of Venice Act V, sc. i)  And so, today, in honour of the Goddess Brighid and the Festival of Imbolc, we consider the question, "How can I be the best candle?" 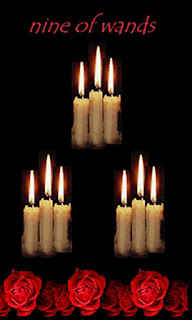 The card above is one I created for the Utah Maninni Project, the first time we did a Maninni Deck in the Salt Lake Pagan Community, in 2000. I was actually thinking of the three faces of Brighid when I did this card, so the three groups of three candles each represent the three fires of Brighid, poesy, smithcraft, and healing. I saw the imagery of three threes as representing in each case my Self, the Goddess, and the World--as in--"I, through the Goddess, give this light to the World". I didn't, of course, have quite the precognitive power to foresee this TarotBlogHop, but I was actually thinking along the lines of "how can I bring Brighid's Fire into the world, in my own small way?" The answer came to me in an odd way, for a Pagan, because as I was thinking of it, a quotation that seemed to answer the question for me landed, complete, with a "plop" of finality, in my head--and the quotation (here's the odd part) was from a Christian pastor. The quotation I 'heard', and which I have no doubt whatsoever was sent to me by the Goddess, is a famous aphorism of John Wesley, founder of Methodism (and we are discussing "methods" here, aren't we?) Here's the quotation:

I remember thinking how coincidental it would have been for my card had the quotation had nine lines, rather than seven, but things don't always come out quite that serendipitous. However, it resonated with me as it has done since the first time I heard it, many years ago as a Catholic high school student. And today, for this blog hop, I am thinking of all the layers of meaning here. A Christian pastor--as a good candle, I don't hold prejudice towards any religion or teaching, but take and reflect Light wherever I find it. An exhortation, filled with the word "all"--a candle doesn't shine only in certain corners of the room, but shines its light everywhere, because it is a candle. So, shine wherever I am, to all the corners of my current "room", no matter who else is there, because I am a Light and that is my nature. And, of course, the resonance of certain words...look at the quotation, the way it appears on the page, and start with the word "good", and simply look straight down from there. If your display is similar to mine, you will get the hidden message "good--means--ways--places--times--people--ever"...And that one hits me over the head like the very anvil of Brighid's Forge. "Good" means ways, places, times, people...either "ever"yone, or FOR"ever"....So. I will be my Self, shed my Light, everywhere, for everyone, not because of who/what THEY are, but because of who **I** am. I am Brighid's candle. I will shine. You?

Posted by Aisling the Bard at 5:00 AM