Too Much Of A Good Thing? 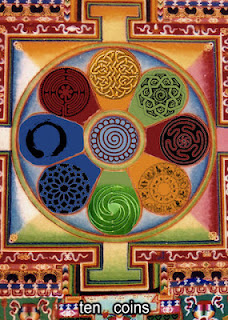 It's a mandala-fest! In the words of the card's creator, Daniel Webster Christensen:  "Mandalas are used in almost every religion to serve as a symbol of the faith and of the cosmos, (aka frame of being). So mandalas on top of mandalas, surrounded by mandalas, is that overwhelming unity of world views, all trying to define (and frame) the same ground of being. For the reference, the mandalas used in the art are: background: tibetan sand painting center: generic spiral top of ring: Celtic, (moving clockwise): Islamic, wheel of Hekate from Greece (also symbol of the ATC), zodiac, crop circle, rose window from Chartres, zen buddhist circle, and the Chartres labyrinth. 10 is completion bordering on overabundance. Coins are Earth or the frame of being."

So we are looking here at completion, overcompletion, complexity, and a state of complacency bordering on confusion. Sometimes when things get finished, they are so tightly wound you can't see the details for the pattern. Ten coins tells us that today something we have finished is so densely packed that we are too busy looking at the form to see the substance. It's not about what it looks like--it's about what it means. Try going there, even if you have to spend a few of those coins. Break the pattern--the devil--or the divination--is in the details!
Posted by Aisling the Bard at 1:23 PM No comments: