Spread of the Week...

Just a note to those who follow--life has become convoluted lately and for the foreseeable future I am not going to be able to update this blog every day. So, when I have missed a few days, we'll be doing a spread, using the number of cards equivalent to the number of days missed. So, since we haven't updated for four days, that means today, a four-card draw, and of course that almost shrieks "elemental attributions"....so--four cards, one each for Head, Heart, Hands and Hopes, or, put more simply, Air, Fire, Earth, and Water: 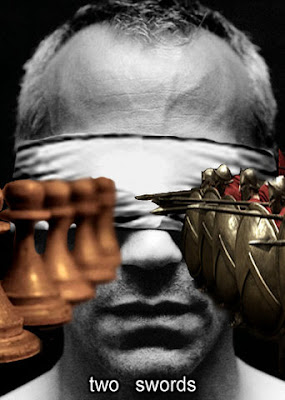 The Two of Swords is a card about balance, and about imbalance. Where swords are fire, this card is about making choices between two things we want or will, but where swords are Air, as with this spread, we are dealing with Ideas--two ideas, neither of which is compatible with the other, and the necessity of choosing between them. There's a reason why the person on the card is blinded--neither choice shows all of itself in the first iteration. They are ideologically and intrinsically in opposition to one another, and you can't have both. And yes, you're "blind" in a way, when you attempt to make this choice...so--let's see whether any of the other cards will give some insight.... 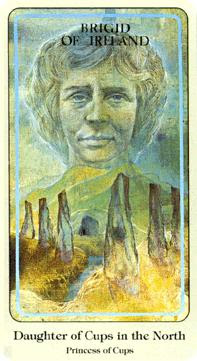 Card #2, Heart: Daughter of Cups, Haindl Tarot
Brighid is the Irish Goddess of poesy, smithcraft, and healing, and seems to be a pretty good representation of the "Heart" as we are interpreting it in this spread...it's Fire, perhaps the bardic "fire in the head", and represents what we Will, or what we want/desire/care about. As represented by Brighid, this card fits with the preceding card by suggesting to us that the power of prophecy, of intuition or the Divine Spark of gnosis or inspiration of the Gods, might serve as the key to show us what our True Will is, in the matter of the choices above. We have to make a decision, and the two choices are not clear--so use the power of Brighid to help us decide what we truly Will (which is different from what I 'want', but that's another discussion). 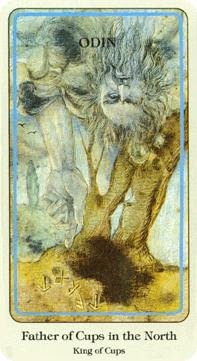 Odin is the Rune-Lord in this card, sacrificing himself to himself, to receive wisdom of the arcane. Most importantly for his position in this spread, the card shows action--but, if there is such a thing, passive action. Odin acted, he did something, which is the representation of this card--"Hands" asks, "what should I DO". And in answer, the card says,
"Wait. Listen. Pay Attention. You are going to receive wisdom and knowledge here. Put yourself in the position where you can do that, and let it happen." So--our Hands must rest, and perhaps pick up a tool of writing in order to record, as Odin did, the new ideas and suggestions which the Universe will afford us. 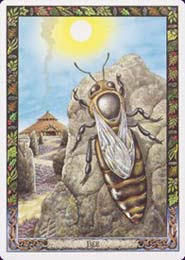 The representation of our Hopes, the Water/Emotion component of this layout, is the BEE--which means Community, Celebration, Organisation. Bees invite us to celebrate. Seems as if, connected to the other three cards, our Hope is that the choice we finally make will bring joy and celebration to ourselves and our community, however we are defining that word as related to this instance. Finely attuned to the position of the sun in the sky, it is the bee who brings the sacred solar drink of mead as a gift to humanity. The bee, with its highly defined social structure and extraordinarily productive and efficient community, all centered around the Queen Bee, was seen as symbolic of the ideal society - centered on the Goddess, paying homage in sacred dance to the sun, and producing an amber substance form the flowers of the fields and woods that could both feed and divinely intoxicate. So, here, this card says, "In making the Choice your Head must make, consider the needs of your Heart--Do the work of your Hands, and focus on the richness and bounty the correct choice will bring to you and all whom you love."