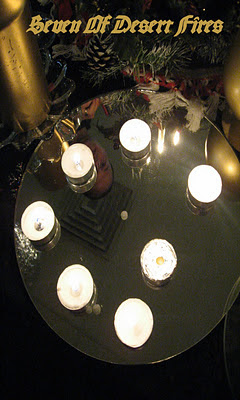 January 3, 2012: Again, from the Utah Maninni Three tarot project, today's draw is the Seven of Desert Fires (seven of swords, or rods, depending on how you use the attribution--in this deck, "fires" equals "swords"). Here is the attribution from the creator of the deck, and then the interpretation by your Tarot Witch:
********
From Anissa Ward (Melusine): "I attended Aspen Grove's Yule when I was home from school for Winter Break, and forgot my camera; but I found this photo on the witches meetup. It was perfect for the Seven of Desert Fires, and it did the thing I wanted to do in my card, which was recognize the Goddess Utah in a particular way...to acknowledge that for over 20 years, to my knowledge, there has been at least one group holding a public celebration for every one of the eight Sabbats here in Utah. As I am no longer in Utah, and the people here in Seattle don't really believe there can be Pagans in such a repressive culture as Utah is seen to be, it's important to me to be able to acknowledge that. I started attending Quickbeam when I was a little kid, and things have only gotten better since.

Upright: It's hard to fit all those tealights on the mirror without coming very close to the edge. The seven of fires indicates a change of direction. Your Will has been focused on the original idea, but things have mutated, and now there are new angles to consider. What might you be missing if you don't step back and reevaluate the situation?

Reversed: If you turn a candle over it goes out, doesn't it? You're getting lost in the trivia, and you've lost sight of what you originally Willed to accomplish. Too many details, not enough focus. Unclutter yourself."

Seven fires seems a bit excessive, but sometimes we can't see the forest for the trees, and we keep planting more and more trees, because they take so long to grow. You're becoming distracted by details, and that's making most of your efforts useless. If you really want to create something in accord with your Will, you have to focus long enough to figure out just what your Will is. Sit back, in front of your ONE fire, and think about the real issue, the underlying energy of the thing you are trying to achieve. Then go forth, ignoring the distractions, and do that thing. Your fire will begin to burn far more brightly if you tend it a bit.

Posted by Aisling the Bard at 8:58 AM No comments: