Eye Of The Sun 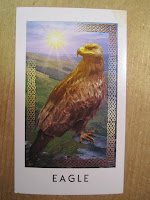 Today the world is celebrating either the Vernal or Autumnal Equinox, that day of "equal night" when the balance tips to change the seasons. And today, our random draw did not produce a tarot card, but a Druid Animal Oracle card, giving us the daily totem beast of the Eagle. So, what's that about?

There are relatively few surviving Celtic myths concerning Eagles, but its Gaelic names - Iolair (Guide to the Air) and Righ na h-Ealtain (King of the Bird World) - suggests the high regard in which it was held. It was aslo called Suil-na Graine (Eye of the Sun), since it was a commonly held belief that Eagles could look at the sun without blinking. Parent birds were said to initiate their fledglings by taking them close to the sun to stare at it, and those who blinked were judged unworthy and fell to their deaths.

In many tales the Eagle is in conflict with the serpent of the underworld, a symbolic struggle that represents the dynamic equilibrium between light and darkness, summer and winter, life and death. So, of course, the Guides send us this card on the "day of balance" to remind us that we reflect in ourselves, and are affected by, the cosmic balance. Or lack thereof.

If Eagle speaks to you, he is perhaps telling you that you are too close to a situation to be able to see what is really going on. He also heralds a period of expansion, growth and success. This may include recovery from illness and the regaining of strength after weakness. Eagle brings a message from the highest powers, advising you to attend to your spiritual side; again, it's about balance. Eagle is an avatar of courage and exploration; he teaches you to soar, feel the wind beneath your wings, know their strength, and allow faith and courage to carry you to new heights.

It is the Spring Equinox where I live; the sun is bright, and we can feel the wind beneath our wings. Fly on!
Posted by Aisling the Bard at 9:23 AM No comments: